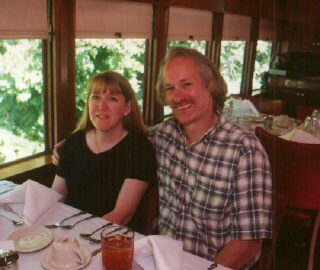 
Jim has worked as an auto collision repair tech in St. Louis, Mo. for over 30 years. He graduated from Ranken Technical College. The shop where he is employed is the largest Buick dealer in the central midwest. Jim received the 1997 Collision Refinish Technician of the year award from ASE. His hobbies include collecting petroliana, especially old body shop items, collecting antique fruit jars and milk bottles and computer publishing. His desktop published newsletter on antique bottles earned three national awards from the Federation of Historical Bottle Collectors in the five years he was editor. Jim and Maureen regularly play power volleyball in league and open play. He has installed a Webcam so that Web visitors can watch fish swimming in his pond in live video at Pondcam.com.

Maureen works for the Lutheran Blind Mission. She sends braille, tape and large print materials to visually impaired people all over North America. Although she is sighted, she has learned braille transcription to better serve her clients. Maureen "prints" braille transcribed books on multiple computer driven braille embossers. Her hobbies include collecting antique milk bottles with images of cows on them and making fabric banners for her church and selected charities. Maureen and Jim usher and perform other services for their church, Christ Memorial.

Vickie married Gabe Cotton in 2000 and gave birth to little Eli in 2001. Eli's sister Sophia was born in September 2003. Vickie works across the Internet for her sister's San Jose, California financial consulting firm. Her husband is a union carpenter for commercial construction projects in St. Louis. In her senior year at Affton High School, she directed the school play, The Diviners, and was editor-in-chief of her school newspaper. Vickie was a student at Northwest Missouri State University in '96. She majored in creating waves socially and journalism. She also attended St. Louis Community College.

What we believe in - puts everything into perspective.

Links to Web pages about their home town, St. Louis, are found on the Potts' St. Louis Home Page.

All content and locally linked images © 2005 Jim Potts
This page is part of a site designed with frames.